¶ Born William M. Woodard II, in Terre Haute, Ind. in ’44, Will moved to Owensboro, Ky. in ’51, a little river town that sits on the southern banks of the Mighty Ohio.  Will took the name Callery when his mother remarried.  Will’s father, William M. Woodard was killed in ’43 flying B17s out of England over Germany.  Will left Owensboro in ’62.  Will Callery (aka Billy C.) hit the Left Coast around ’67 playin’ roadhouses, coffee houses, bars, and concerts from Coo’s Bay, Oregon to San Diego.  Places like Cid’s Bluebeat in Newport Beach, The House of the Rising Sun In Redondo, The Ice House in Pasadena, The Ash Grove in L.A., opening for the likes of Sonny Terry & Brownie McGee, Lowell George & Little Feat, Tom Rush, David Lindley, Taj Mahal & scores of others.

¶ Will Migrated back to the Sweet Sunny South @ ’69 / ’70 living on Nashville’s 16th Ave as a staff writer for April-Blackwood Pub (CBS).  Then headed out for Austin, Tx. where he fell in with Jerry Jeff Walker.  Will’s discography with Jerry Jeff:  THE FIRST SHOWBOAT, THE POT CAN’T CALL THE KETTLE BLACK, LEROY, PASS IT ON, HANDS ON THE WHEEL.  Will (aka Billy C) traveled off n’ on with Jerry Jeff for ten years or so.  Jerry Jeff played Will’s song HANDS ON THE WHEEL for Willie who Will (Billy C) had been opening shows for at Austin’s CASTLE CREEK, a hot spot owned by Doug Moyes and Tim O’Conner.  Willy cut HANDS on His RED HEADED STRANGER album in ’75, it went Gold then Platinum, Double Platinum and has since sold around fifty million copies and was nominated for a Grammy that year.  All of this set Will up with COLUMBIA RECORDS under management with WILLIE NELSON MANAGEMENT and a leap into prime showcase gigs with Willie and others including top billing at WILLIE’S FOURTH of JULY PICNICS of ’76 & ’77.  Sometime @ ’79 “HANDS….”  was chosen for the title song in Robert Redford’s Electric Horseman.  Other movies include Willie’s Red Headed Stranger / Harry Dean Stanton’s Partly Fiction / Kevin Costner’s Yellowstone.  TV: Saint Elsewhere & Northern Exposure & others.  NORAH JONES  has since recorded HANDS ON THE WHEEL and released it on CD, VINYL, and DVD.

¶ Sick to death on over twenty-five years of massive cocaine addiction, whiskey, and periodical seasons of mainlining heroin he became disoriented, hopeless, and destitute.  In ’82, by the Grace of God, Will had an encounter with the Holy Spirit,  receiving a miraculous deliverance before even knowing who Jesus Christ was.  In the twinkling of the Lord’s Eye, he walked away clean receiving JESUS CHRIST as Lord and Saviour of his life somewhere around two and half months later.  Because of this incredible deliverance (no withdrawal, no rehab), Will immediately became clean as a hound’s tooth and past the point of no return.

¶ Callery walked off stage in ’84, went back to his hometown bought a couple of timber-size chain saws, axes, and wedges, and went to work fellin’ timber in Kentucky.  After a life-threatening incident that laid him up for a year, he moved to the Great Northwest and lumberjacked for over twenty years.  After nearly 25 years working timber in the wilderness and forests of this nation, all the while being schooled by the Holy Spirit while studying the Word of God, plus another 13 years studying and writing while staying aloof of the public eye, and, after one major slip-up due to a serious season of discouragement, Will is now ministering THE WORD OF GOD; a Penman of the Lord, a writer of books, songs, psalms, and spiritual songs – all to the Glory of God. Ain’t It So!!!  AMEN? 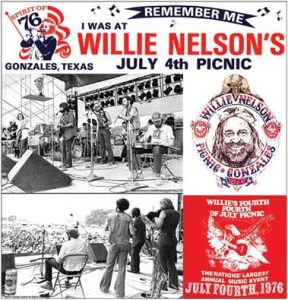 Lumberjackin’ for Carson / Western Slopes of the Cascades ’06